Life Without the Internet in the Divadlo na Orlí: The Original Musical Offline! 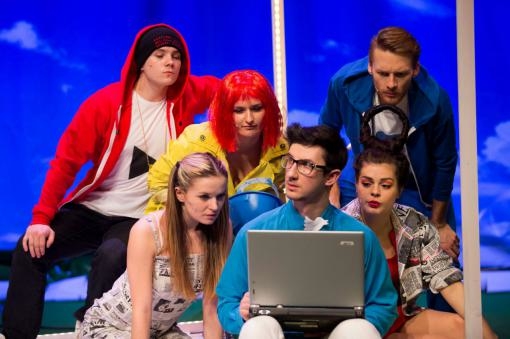 The story of the musical comes from the book Without the Internet. My Half Year Offline by German journalist and editor of Süddeutsche Zeitung, Alex Rühle. Offline! tells of the experiences of a person who gave up the internet willingly for half a year. The musical was studied by the graduating year of musical students of the Theatre Faculty of the Janáček Academy of Music and Performing Arts, and the production is the original idea of dramaturge Martin Sládeček and composer Mario Buzzi, directed by Lukáš Kopecký.

The book by German journalist Alex Rühle is a diary written by the author during several months without the internet. “However, the individual diary entries are written so well that we can almost speak of essays, giving an insight into what is happening to a person experiencing this online detox day by day from different viewpoints,” says Martin Sládeček. By describing his abstinence, Rühle reflected on not only his own internet addiction, but also the borders and sense of omnipresent technological advancement. “After reading the book, I listened to the advice of a certain Munich dramaturge, who is also mentioned by Alex in Offline. Together with Lukáš Kopecký, we chose the publication as a libretto,” remembers Sládeček. Now, the producers want to offer music students a space, where they don’t have to simply represent or interpret the thoughts, feelings and views of others on the stage, but could speak for themselves, since today everyone has experience with the internet.

The musical’s premiere is scheduled for Thursday 28 February from 7 p.m.

The music for Offline! was composed by Brno composer Mario Buzzi, with the genre being mostly funk. The actors will be singing on half playback. “Our rehearsing was preceded by a similar experiment, of course much shorter, because today no one can afford to be offline for more than fourteen days,” says director Lukáš Kopecký. Like Alex Rühle, the young actors also wrote an offline diary during the time of the experiment. Some parts of their entries were turned into songs while, others will be printed on the programme for the production. The scenography and costumes were created by Andrea Mužíková and come from the motifs of a computer-generated user interface.