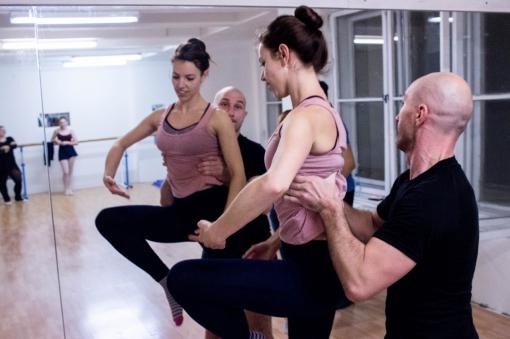 Dancing with a Partner is the topic of the new workshop of the Balladine dance school. The target is to learn the choreography of Nacho Duato. Vendula Vlasáková and Josef Koutný are the managers of the workshop.

A part of the newly offered workshop is training, which leads to the managing of one of the choreographies by Nacho Duato. This world-renowned Spanish dancer and choreographer studied in London, Brussels and New York. He began his dancing career in the Swedish Cullberg Ballet, joining the Nederlands Dans Theater under its artistic manager Jiří Kylián a year later, where he stayed for the next ten years. In 1983, he was the choreographer for the Jardí dance to the music of Maria del Mar Bonet, for which he received first prize in the Internationaler Choreographischer Wettbewerb, Köln. In 1988, Duato was named resident choreographer of the NDT together with Hans van Manen and Jiří Kylián. Later, he became the artistic director of the Compania Nacional de Danza Nacho Duato company and then managed the ballet company of the Mikhailov Theatre in Russia. In 2014, Nacho Duato became the general and artistic director of the Berlin state ballet.

The workshop is led by the dance instructors Vendula Vlasáková and Josef Koutný, and is for dance enthusiasts, individuals, friends and pairs who have at least a basic knowledge of the elements of ballet.

The event is set for Sunday 22 April 2018 from 3 p.m. on the grounds of the Balladine dance school.