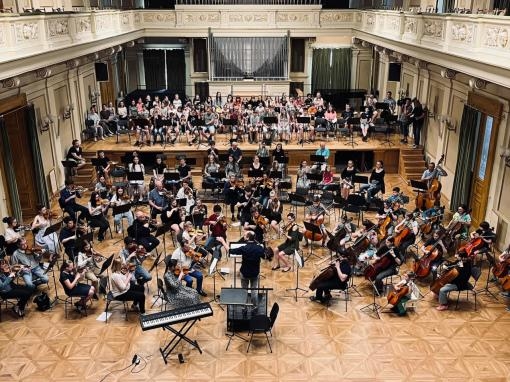 The most ambitious, the most unrepeatable, and the most challenging to produce. This is this year's “Mozart's Children” festival, whose Gala Concert will take place this Sunday at the Janáček Theater. Nearly two hundred performers will appear on stage, with young talents from all over South Moravia outnumbering professional musicians.

“We have never made any secret of our high ambitions when we presented children with challenges like Dvořák's “From the New World”, a concert with Hradišťan, a jazz big band, or band Tata Bojs. But this year's concert exceeds all of this,” said Marie Kučerová, director of the Brno Philharmonic. She pointed out that over the course of one evening, children will try three different types of cooperation: in the first one, they’ll form the basis of a large ensemble while professional musicians simply complement them, in the second one it is the other way around, and the third one will feature small and young dancers joining the music.

Nearly two hundred performers will appear on stage on Sunday, with young talents from all over South Moravia far outnumbering the professional musicians. “This is thanks to Kryštof Mařatka's composition “Invisible Forest”, which will be performed in its Czech premiere. The author composed it for children of all ages and different musical levels. They form the basis of the orchestra with the adults only complementing them. And not only philharmonic musicians, but also teachers from the elementary school and even mothers,” said Kristýna Drášilová, project coordinator and education teacher at the Brno Philharmonic. Mařatka was commissioned for this melodramatic fable by the Paris Philharmonic to involve children from troubled slums and then performed in France's most prestigious concert hall. The fairy-tale-like story tells of how an actor lost in the Bohemian Forest began to sing and act. “The role of the narrator will be assumed directly by Mařatka. It's great that the children will get to perform a piece by a living author, whom they also become personally acquainted with,” Drášilová emphasized. The closing ceremony will take place on Sunday 12 June at 7pm at the Janáček Theater.

It’s not only the composition itself that is specific, but also the process of its preparation. “The final form was actually a surprise for us, because the work allows for performance in almost any ensemble. It is not standard for a symphony orchestra to have twelve flutists and sixteen cellists. The goal was to allow all musicians who have the desire to play and improve to participate. Since this is a contemporary piece, the orchestra is expected to use non-standard sonic instruments such as disassembled flutes, pipes, the soundboard of a cello, stomping, whistling, calling, and singing. On top of this, the kids learned to follow the conductor's gestures during the playing, and even sitting on the chairs was problematic in the beginning. Despite all these challenges, the conductor and choirmaster Michal Jančík led the children to a result that he can proudly speak of as professional," said Drášilová. There are twenty-five philharmonic musicians in the orchestra for this piece, about seventy children, and they are supplemented by eighty children from the Kantiléna choir.

The more experienced pupils of the Elementary Art School will perform with the Philharmonic in the second piece of the concert: the symphonic poem “The Wild Dove” by Antonín Dvořák. Inspired by a ballad from Erben's “Bouquet”, the work was premiered at the Besední dům, the current home of the Brno Philharmonic, under the baton of Leoš Janáček in 1898.

The concert is being filmed by Czech Television, which is preparing a documentary about the project and the composition “Invisible Forest”.

The gala concert is the highlight of the festival program. But it's far from the only one. There are also concerts for kindergartens and schools, music workshops, and the traditional Children's Soloist Concert. “This will allow children to play with a professional orchestra, featuring themselves as soloists. The best from all over South Moravia will perform, and people can look forward to solo dulcimer, accordion, piano, trumpet, and harpsichord," said Petr Karas, director of the co-organizing Smetana Elementary Art School.