Mozart's Magic Flute at the Brno National Theatre. A journey into space with Miroslav Krobot 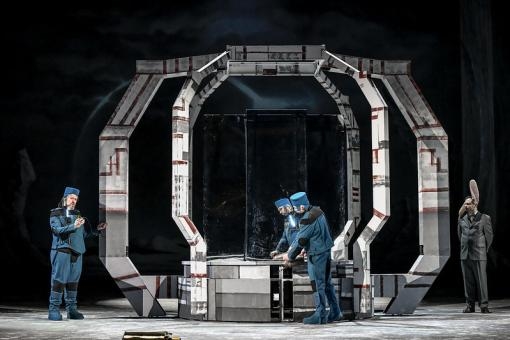 The next-to-last premiere of the 2021/22 season is Mozart's “The Magic Flute”. It will be directed by Miroslav Krobot. This unconventional presentation of the opera promises the audience a journey into space. The musical staging is led by Pavel Šnajdr. Title roles will be played by Jiří Sulženko, David Szendiuch, Petr Nekoranec, Daniel Matoušek, Martina Masaryková, Doubravka Součková, Jana Šrejma Kačírková, Andrea Široká, and others. Scenography by Andrej Ďurík.

The new “Magic Flute” will be the first opera production by the outstanding actor and director Miroslav Krobot, whose tenure at Dejvice Theatre has become a real epoch. It was also here that he first encountered Mozart's most popular opera and performed it in his own adaptation with the Dejvice company to great success in 2003. "The Magic Flute is about hope, quite an essential topic, especially today. But, even without these momentary crises, I view it as a basic simple relationship between two people, about love and a certain hope that can solve a lot of things. Making the Magic Flute opera compelling and interesting is the hardest part about it, making it more than just a fairy tale cliché. Opera is a great challenge for me, and I approach it with respect and humility. We want to take inspiration from the diversity of Mozart's music and the comedic potential of the libretto to stage a visually, musically, and dramatically appealing production," says Miroslav Krobot about the production. The premiere is scheduled for 13 April 2022 at 19:00 at the Janáček Theatre.

“The Magic Flute” is based on the tradition of the singspiel, which alternates singing with the spoken word; it's full of philosophy and symbolic references as well as humour. Although “The Magic Flute” was intended for a folk audience in the suburban Schikaneder Theatre, the composer wrote unique musical numbers for his characters, including the virtuoso part of the Queen of the Night, the pinnacle of any coloratura soprano's art, and the lyrical arias of the lovelorn couple Tamino and Pamina, as well as the pa-pa-pa duet of Papageno and Papagena. In Brno, these will be performed by Doubravka Součková, Martina Masaryková (Queen of the Night), Jana Šrejma Kačírková, Andrea Široká (Pamina), Petr Nekoranc, Daniel Matoušek (Tamino), Tadeáš Hoza, Jan Šťáva (Papageno), and others under the baton of Pavel Šnajdr. This narrative production will provide the audience with a glimpse into the realm of fantasy and sci-fi.

With the help of a magical flute, the talkative bird Papageno, and three mischievous little child-spirits, Tamino searches for the beautiful Pamina, who has been kidnapped from her mother, the Queen of the Night, by the powerful Sarastro. This is how Mozart's opera typically begins, but this version of the story takes its origins many years earlier on the spaceship Seven Rings of the Sun, which, due to a malfunction, ended up in an unplanned orbit around an unknown planet. The crew beamed down to the surface to spend a number of years trying to regain control of the ship. As the years passed, the rift between the crew members grew, culminating in the death of the captain. He, against all expectations, handed over his powers not to his first mate with the poetic nickname Queen of the Night, but to his second mate, Sarastro. Both camps still continued their futile attempts to regain control of the spacecraft, but this is a task that can only be accomplished by a new generation.

“Andrej Ďurik and I were looking for a visual form. The fairy tale is a bit too first-rate for us. Fantasy is a genre that is very popular today, and it usually has a good ending as well. That's why we chose it as a solution. Andrej Ďurík and I were both visually entertained by those old Star Trek shows from the sixties and seventies, which are nowadays basically fairy tales and in their own way actually touching,” adds Krobot.