Musica Florea: A stage performance of the overture My Home by A. Dvořák 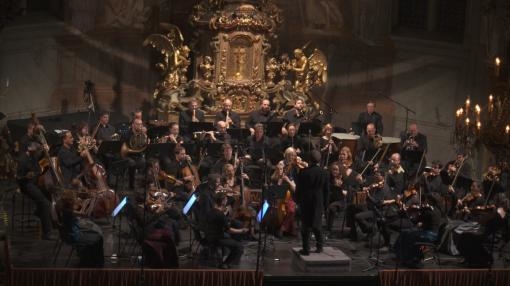 Musica Florea is continuing to discover the original sound of romantic instruments in the studying and recording of Dvořák’s symphonies. This year the orchestra is performing the 4th symphony of Antonín Dvořák, which will be introduced by the overture Můj domov (My Homeland), op. 62.

Dvořák’s 4th symphony will follow Nos 1, 2, 7, 8, and 9 as the sixth symphony in the series in which Musica Florea decided, under the leadership of Marek Štryncl, to record and perform for the public with their original sound. The fourth of Dvořák’s symphonies will be supplemented by the overture Můj domov, which the composer wrote for the theatre production by Josef Kajetán Tyl from the dramatist František Ferdinand Šamberk. This musical work is among other things thematically derived from the song Kde domov můj by František Škroup, which became the Czech national anthem.

This project by the Musica Florea orchestra is part of the performance and recording of all of Dvořák’s symphonies in authentic period interpretations. This helps to discover what has been forgotten in a technical and non-musical approach. “I am convinced that romantic composers and interpreters had at their disposal a wider range of expressive means, concerning for example the decorative use of vibrato, more varied articulation, tempo changes for effect and agogics. Many of these “poetic” methods were not written on the scores but rather their use was assumed and seen as absolutely automatic. All these original parts of romantic music were for the most part slowly restricted or even completely eliminated. It began to be the case that what was not in the score no longer had the right to exist. It is like drinking coffee without coffee, playing romantic music without romantic interpretation. The musicality of interpretations of 19th century works was markedly restricted in the century that followed. Therefore it is essential to revive the true romantic ideal,” says Marek Štryncl, head and conductor of the symphony orchestra.

The concert will take place on 30 November at 7 p.m. in the Red Church in Brno.