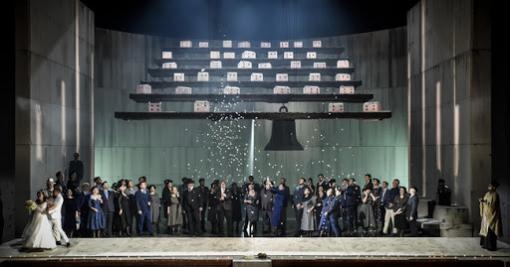 The theatre (NTB) has released details of the 2021/2022 season, which includes premieres of five operas and three ballets. Janáček Opera has dubbed the upcoming season “Follow the voice of the heart…”, and in keeping with this, Peter Grimes by Benjamin Britten is scheduled, directed by David Radok. The long-awaited, The Greek Passion by Bohuslav Martinů under the direction of Jiří Heřman, and Mozart’s The Magic Flute directed by Miroslav Krobot are included, too. NTB’s ballet celebrates the 250th anniversary of Ludwig van Beethoven’s birth by presenting a piece entitled Beethoven with Mário Radačovský as the choreographer. After more than thirty years, Cinderella, a ballet by Sergei Prokofiev, returns to the stage of the Janáček Theatre as a brand-new production choreographed by Markéta Pimek Habalová. The new season reflects the sentiment of the heading “Honouring the Greats”.

National Theatre Brno hopes to debut several new productions in the form of opera, ballet, and drama. In the hope of welcoming back audiences, promising performances are planned, such as a Gala Concert to celebrate the jubilee year of Richard Novák (song recital date: 24 September 2021, Reduta Theatre), opera works – Peter Grimes, The Greek Passion, The Magic Flute, Alcina and Otello. The ensemble members of the ballet are preparing for Stabat Mater, Beethoven, and Cinderella. In addition, performances at the Bishop’s Courtyard (Biskupský dvůr) are scheduled, as is DANCE BRNO 2021 festival and Balet Gala, an event starring major Russian ballet dancers from the Mariinsky Theatre in Saint Petersburg. The BNT ballet ensemble is also appearing at Dance Life 2021, a grand fair that celebrates dance at the Brno Exhibition Centre. The December schedule promises events for children to accompany performances of the Nutcracker.