News: Agreement on the terms of construction for the Janáček Cultural Centre 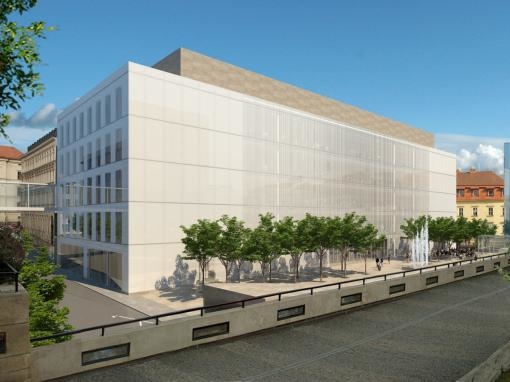 The City of Brno has announced that an agreement has been reached with the owner of the International Hotel, HIB DEVELOPMENT, a. s. If the agreement is fulfilled, the construction of the Janáček Cultural Centre (JKC) will not be a compromise, but will fulfil the vision of having a top concert hall in Brno and gaining a new high-quality public space in the historic city centre. The interrelated key documents, i.e. the exchange agreement, the artwork purchase agreement, and the cooperation agreement, were recommended for approval by the Brno City Council today.

“For 19 long years, Brno has been preparing the construction of a new concert hall in the Janáček Cultural Centre. And for about as long, the city has been trying to come to an agreement with the neighbouring International Hotel on the property settlement of the former substation and the appearance of the square in front of the hall, which will bear the name of his father Ludvík, as suggested by Milan Kundera. The procedure, as proposed, will mean that the concert hall will be built without compromise and with world-class acoustics, with parameters designed by the Japanese master Yasuhisa Toyota. This is mainly due to the relocation of the technological centre of the hall from the roof structure to the underground forecourt, which will eliminate the transmission of noise and vibrations into the hall. In addition, the city will gain a once-in-a-lifetime opportunity to build a new high-quality public facility right in the historic centre that holds great urban and social significance,” said Tomáš Koláčný, Deputy Mayor of Brno, describing the reasons that led to the search for an agreement.

”An important factor is the agreement on the exchange of land and buildings. The city will offer the four-storey house at 20 Starobrněnská Street including the courtyard on the newly separated plot, while the passage to the Velký Špalíček arcade will remain wide enough, as well as the escape route from the properties that are part of the arcade. If the exchange is approved, the lease right for all 16 tenants to the non-residential premises on Starobrněnská Street will pass to the new owner on the date of the legal effects of registration in the Land Registry. Most of them have contracts for an indefinite term with a notice period of 3 months, while only one has a fixed-term contract until 30 June 2033. In exchange, the city will receive two plots from HIB DEVELOPMENT, a. s. One of them holds the hotel's transformer station, while the other holds the staircase that provides a connection from Veselá to Husova and the sculpture Pohostinnost, which will become part of the planned JKC forecourt,” said Róbert Čuma, City Property Councillor.

The proposed exchange is being carried out with an additional payment of the difference of the exchanged values in favour of the City of Brno. HIB DEVELOPMENT, a. s., will provide an additional payment of CZK 39.2 million before signing the exchange agreement, while at the same time a cooperation agreement will be concluded which will deal with the demolition of the substation, the new appearance of the JKC forecourt, the construction of a staircase, and the communication link between Husova and Veselá.

“An equally important document is the cooperation agreement, based on which the coordination of steps in the construction of the JKC and the detailed cooperation between the city, Brněnské komunikace as the investor of the JKC, and HIB DEVELOPMENT, a. s. are agreed. Among its main elements is the withdrawal of the hotel owner's appeal against the entry into force of two decisions of the Brno-Central Building Authority, which permitted the construction in its final and ideal form for the city. It also defines the cooperation on the final design of the final surroundings of the new hall for Brno, including the planned extension of the hotel and its connection to the new staircase and access route. The last point is the financial participation of the city in the induced investments in the International, the construction of a new transformer station, and the relocation of the connection, which will run in the millions of crowns,” said the Mayor of Brno Markéta Vaňková.

“In recent weeks and days, very intensive negotiations have been conducted with the owner of the International Hotel, the Property Department of the Brno City Hall, and Brno Communications which resulted in today's approved agreement. I would like to thank all the players for their cooperation. I am pleased that the Janáček Cultural Centre will also include open underground garages. And thanks to the agreement, their originally planned capacity will be completely available to Brno residents,” concluded Transport Councillor Petr Kratochvíl.