Summer with the Opera of the National Theatre Brno 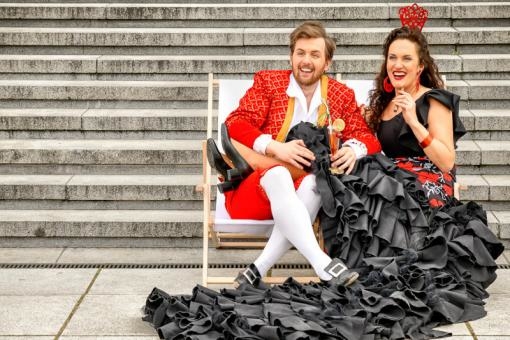 This summer, the ensemble of the Janáček Opera at the National Theatre Brno is again putting on traditional open-air performances in the courtyard of Špilberk Castle. For the first time their summertime schedule shall include performances at the open-air stage of the Amphitheatre in Mikulov. Well-known works are planned, such as Rossini’s The Barber of Seville, Bizet’s Carmen, Verdi’s La traviata and a new production of Puccini’s La bohème.

The open-air shows will run from July to September. The Barber of Seville shall be the first in the series on 1 July. Unlike in previous years, the opera ensemble is going to perform Bizet’s Carmen in Mikulov on 12 August, alongside dates at the usual venue of Brno. Soloists include Václava Krejčí Housková as Carmen and Roman Hoza as Figaro.

“With the Janáček Opera of the National Theatre Brno putting on these shows for audiences in the open air, there’s hope for other, highly anticipated live performances. Everyone’s waiting for the moment that live music is heard again, bringing joy and calm and serving as an effective remedy for these trying times. The Janáček Opera is set to perform for the first time at the open-air stage of the Amphitheatre in Mikulov; it’s my belief that this charming venue will be truly inspiring, as will the opera itself,” says Jiří Heřman, the artistic director of the Janáček Opera of the National Theatre Brno.

The courtyard of Špilberk Castle

13 August at 7 p.m. The Barber of Seville, in cooperation with the Brno Music Marathon (Maraton hudby Brno) festival.

The Amphitheatre in Mikulov

Photograph: Archive of the Janáček Opera