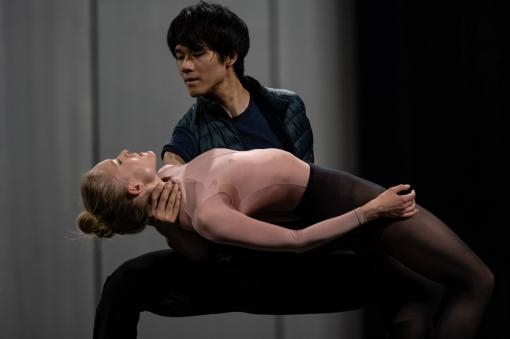 The last premiere of the ballet season will be a performance entitled Radio and Juliet written by Edward Clug, a renowned European choreographer. The ballet with the subtitle "What would happen if Julie decided not to die" is accompanied by music of the UK band Radiohead.

Radio and Juliet  is a neoclassical ballet created in 2005 for the ballet ensemble of the Slovenian National Theatre in Maribor and is one of the most successful choreographies by the young artist Edward Clug, who has also had a great track record as a performer. His work is currently sought-after  not only in Europe, where he collaborates with such ensembles as the Bolshoi Ballet in Moscow, the State Ballet in Vienna, NDT 1 and 2 in The Hague or with ballets in Dortmund, Essen and Lisbon, but is also presented through his performances  at dance festivals all around the world.

Radio and Juliet  combines dance telling the most famous love story with music by the band Radiohead. In this sense, the name Radio and Juliet  is a pun. Radiohead dealt with this Shakespearean tragedy in one of their film songs in the soundtrack to a film by Baz Luhrmann, starring Leonardo di Caprio and Claire Danes in the title roles. Romeo and Juliet talks about eternal motifs that appear throughout human history: love, hate, death, intolerance, hope and violence. This timeless story has undergone numerous modifications over the centuries and has been revived in a lot of artistic genres. In addition to Baz Luhrmann, many other directors transferred this story to the screen; Sergei Prokofiev turned it into a ballet; Charles Gounod, Vincenzo Bellini and Frederick Delius created their operas based on it; Tchaikovsky converted it into a concert overture, and Leonard Bernstein eventually re-wrote this story as a musical. In each of these forms, it has become an immortal story that can take place at any time, in many different forms, without losing its meaning, in any period and social context, and therefore in the present as well. The premiere is announced to take place on 8 August  2020 from 8:00 PM at the Mahen Theatre.

Radio and Juliet  is interpreting Shakespeare's play from a slightly different angle. As Edward Clug also explains: “It can be said  that our performance begins when Juliet sees Romeo dead lying beside her. Just to express myself more precisely, we are actually processing  the story backwards, almost as a retrospective of some unfulfilled love. However, all the characters and situations in our production are fictitious, and any resemblance to Shakespeare's Romeo and Juliet is purely... intentional, rather than accidental. You could say that this version is somewhat twisted… My intention was not to retell the story, but to offer the audience an experience from a different perspective."