The band Poletíme? is preparing a live recording of their greatest hits called “Best of do gramofonu” 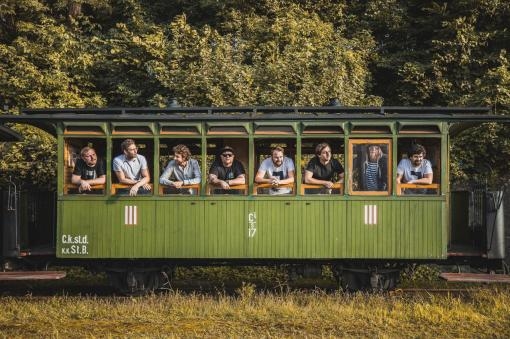 The band Poletíme? returns to the Brno club Fléda on the occasion of recording a new album. The album BEST OF DO GRAMOFONU (Best of, for the turntable) will map the greatest hits in the fifteen years of the band’s existence. Fans will get a unique chance to be part of the live recording in two concert days.

The Brno formation Poletíme? led by singer and lyricist Rudolf Brančovský plays, in their own words, “original banjo punk future jazz country in the spirit of Turbochanson”. They boast a wide range of instruments from banjo to saxophone to violin.

After fifteen years, it’s time for a “Best of” album, and fans will have the opportunity to be a part of it. On two nights, 15th and 16th February, their greatest hits will be performed at Fléda, and the recording of the BEST OF DO GRAMOFON album will also take place. The sixth recording is being made four years after the release of the last one and will bring a cross-section of the band’s musical creations. Czech Television will also be present at the second concert to record the entire concert. The concerts are announced for 15 and 16 February 2023 at 8:30 pm in the Fléda Club.

“Recording a concert with Poletíme? was in the plan for years. I’m glad that it’s happening now after fifteen years of existence. The songs have gotten more vigorous arrangements and tempos over the years. The strength of our band is the concerts. I believe that this way we will be able to capture the atmosphere which is exceptional especially at Fléda,” Brančovský concludes.

Rudolf Brančovský met his bandmates in an evangelical congregation, where they formed a four-piece band in 2007. A year later, they released their debut album Jednoduché písničky o složitém životě (Simple Songs about Complex Life – 2008). After the release of Turbošansón (2014), Vít Kraváček (bass) and Josef Zámečník (banjo) joined the band. In 2016, they went on a joint tour with Wohnout and a year later with Divoký Bill. Their latest album “Chce to hit!” was released in 2018 with eight members with whom they still play today.