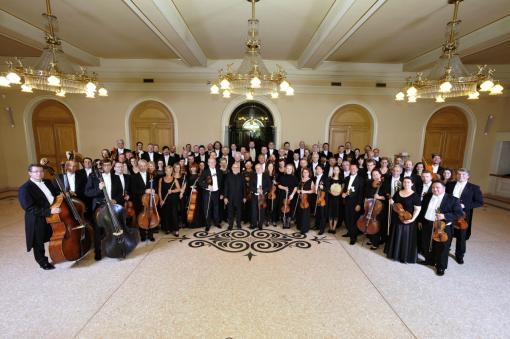 Today, the Brno Philharmonic announced the programme of its 65th season. It is preparing two subscription series at the Janáček Theatre, presenting Czech and world premieres and welcoming internationally-renowned soloists. The programming of the upcoming season will once again connect the music of older and newer periods in an original way. The Beethoven anniversary celebrations will also continue and the orchestra is in for tours abroad.

In the new season, the subscription series return to the shape they had three years ago: two symphonic series at the Janáček Theatre and one chamber-orchestral at the Besední Dům. "Each concert is designed to be a unique musical experience. I would like to highlight two big names that I look forward to. The first of them is Renaud Capuçon, who will perform Korngold's Violin Concerto in D major, and the second is tenor Christoph Prégardien, who will sing Schubert's songs" said the director of the Brno Philharmonic Marie Kučerová.

Both mentioned concerts will take place under the baton of chief conductor and artistic director Dennis Russell Davies, who is starting his third season in Brno. "I am very happy to conduct two Czech premieres of my close friends here, who are among the most successful living composers – Thomas Larcher and Philip Glass. As regards the former, we will play his Symphony No. 3 called A Line above the Sky, which he completed this spring. It was created to a joint commission by six European orchestras and institutions, including the Brno Philharmonic. It is scheduled to have its world premiere on 9 May in Amsterdam, but no one knows yet if that is going to happen," said Davies. Under his baton Symphony No. 2 by Philip Glass will be performed for the first time in the Czech Republic, in one evening with Symphony No. 2 in D major by Johannes Brahms. Another programme of two symphonies having the same serial number is also in the pipeline, featuring the fifth symphonies by Miloslav Kabeláč and Dmitri Shostakovich. The concert will be led by Robert Kružík, permanent guest conductor of the Brno Philharmonic.

Listeners can look forward to one more work composed to  a commission by the Brno Philharmonic. It will have its world premiere. The Armenian composer Tigran Mansurian, whose Requiem was an absolutely extraordinary success in Brno this year, is now composing an orchestral version of his quartet Agnus Dei, after being asked to do so by the dramaturge Vítězslav Mikeš. On the same evening, it will be followed by Alfred Schnittke's Violin Concerto No. 3, which will be performed by the violin maximalist Milan Pala. "The impetus for this combination stemmed from two extraordinary events of the ending season. Firstly, the huge success of Mansurian's Requiem and then the incredible appearance of Milan Pala, who replaced a sick soloist at the last moment. Within a few hours, he studied the virtuosic Violin Concerto in C major by Vranický, and for three evenings he received standing ovations for it. With this unprecedented performance, he asked for an invitation to the new season, this time with a composition that is closer to his temperament," said the dramaturge Vítězslav Mikeš. An interesting point is that both Mansurian's and Schnittke's compositions are dedicated to the legendary Russian violinist Oleg Kagan. The concert will be conducted by Alexander Liebreich.

The year 2020 is still dedicated to the spirit of Beethoven celebrations. "At the first subscription concert at the Besední Dům, we will present this giant figure with three overtures, all of them identically named Leonora, which will frame extraordinary works by Antonín Dvořák and my friend Arvo Pärt. After all, the opening concert of the season in the cathedral on Petrov Hill also features Pärt in its programme, and this will happen on the day of his 85th birthday. An add-on will be Bruckner's monumental Fifth Symphony," Davies said.

Chief conductor Davies will once again perform in a duo with his wife, the pianist Maki Namekawa. They will present a programme of works by Mozart and Shostakovich.

The Brno Philharmonic is to have several domestic and foreign guest appearances in the upcoming season. The first is a week-long tour of South Korea, several days of tours in Austria and Germany with three concerts in Salzburg and others in Bayreuth or at the Cologne Philharmonic. "In all the places mentioned, we will present a programme that we helped arrange, which is not so common. It is mostly a combination of the Czech repertoire and contemporary composers," said Pavel Šindelář, manager of the orchestra for foreign activities. In April next year, the Philharmonic will perform ten concerts in prestigious concert halls in the UK, such as in London, Edinburgh, Cardiff and Birmingham.

Another novelty of the season is the release of two CDs under a proprietary label. The first of them will be the monumental oratorio Lenora by Antonín Rejcha, the second recording will feature, for example, Dvořák's Symphony No. 1 and Bagatelles.

All of the subscription cycles at the Janáček Theatre will offer four programmes, each of them on two evenings, while the Besední Dům series will offer six pairs of evenings. In addition, there are eight extraordinary concerts in the pipeline, entitled Opening, Advent, New Year and an educational one for adults called Opravdový Vivaldi (The Real Vivaldi). The beginnings of all concerts are newly always at 19:00 hours, which applies also to the Jazz & World Music subscriptions. There is a traditional Family subscription or a cycle of concerts by the philharmonic academics entitled Mladá krev (Young Blood). "Given the current situation, we have also expanded our online sales. Listeners can now purchase all of our subscriptions from the comfort of home, starting from 25 May 25 at 12 noon. A week later, on 1 June, we will also launch the online sales of Sezona na míru (A Tailor-made Season) and all one-off tickets," said Kučerová. She pointed out that for the first time this year, a 10% Firstminute discount is offered to all those who purchase their subscription by 19 June. The discount can be combined with other reductions, such as those for senior citizens, children, students and the like. More information can be found in the catalogue, on Facebook and on the web.

The entire programme catalogue can be downloaded here.