The Brno Philharmonic Orchestra will perform on Novosvětská Street. Proceeds from the concert will support the Vesna Association 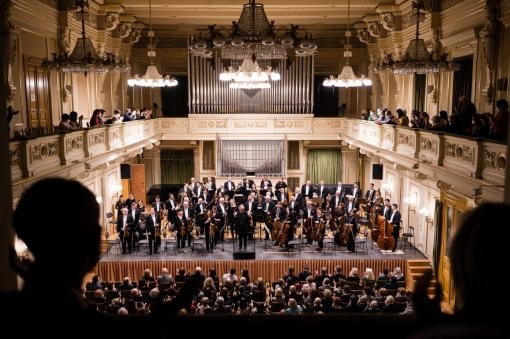 The Brno Philharmonic is holding a benefit concert for Ukraine this week. Proceeds from the entrance fee will go to the Vesna Women's Educational Association, which is now helping Ukrainian refugees. The evening will include Dvořák's Symphony No. 9 in E minor From the New World, conducted by Leoš Svárovský.

“We chose Vesna because since it's located in the neighbouring courtyard of the Moravian Gallery, we see its assistance centre every day. For several weeks now, we've been seeing the streams of Ukrainian mothers with children who come there for material help, practical information, and psychological support. So we know exactly where the money will go and what it will be used for," said Marie Kučerová, director of the Brno Philharmonic.

The concert at the Besední dům will take place on Wednesday, 30 March 2022 and will open at 19:00 with the Ukrainian and Czech national anthems, followed by the Ukrainian traditional song “Hey, Sokols”, sung by the Kantiléna Philharmonic Choir under the direction of choirmaster Michal Jančík. The highlight of the programme will then be Dvořák's New World Symphony. “The concert will be conducted by Leoš Svárovský, who has waived his claim to a fee, as have the ushers. Many thanks go to the orchestra, which came up with the idea and was able to put together the entire, and sizable, cast of the symphony in a few days,” said Kučerová, adding that a single admission fee is CZK 500. She noted that the orchestra will also include two Ukrainian musicians who had to flee their country. “They are currently living in Žďár nad Sázavou, but they were very glad for the opportunity to play music with their Brno colleagues that they know well,” she said.

The benefit concert is the most visible part of the Brno Philharmonic's aid to Ukraine. In addition to the joint concert for Ukraine played during the first days of the war on Brno's Liberty Square, the Philharmonic also focuses on logistical and material aid. “We've offered Vesna storage space in the Besední Dům, and our truck transports material aid within the region and beyond. We offer free tickets to our concerts to Ukrainian audiences; dozens of them have accepted the invitation, which we cover from employee fundraising efforts. At all concerts and in the pre-sale there are sealed boxes of the Regional Charity Brno where concert-goers can make their own donations,” added Kučerová. Music and art workshops for Ukrainian children with an interpreter will also begin next week, and a summer holiday workshop is also being planned for them.