The Brno Philharmonic presents one of the highlights of the season: Schnittke’s Faust Cantata and Iva Bittová 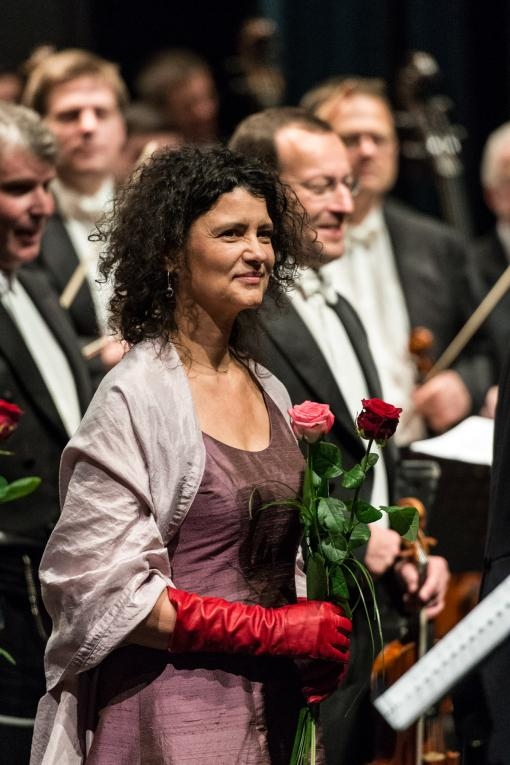 Edvard Elgar’s The Black Knight and Alfred Schnittke’s Faust Cantata “Seid nüchtern und wachet” – the programme to be performed over two evenings at the Janáček Theatre is described as one of the highlights of the 66th philharmonic season. Two dramas: a horror story and a battle for the human soul. And two pieces of work with extensive casting, with nearly two hundred performers on stage. The Mephistopheles part will again be taken by Iva Bittová. The concert is conducted by Dennis Russell Davies.

Faust Cantata was an occasion for the Brno Philharmonic to meet Dennis Russell Davies for the first time; after this collaboration Davies took the helm of the orchestra. “It is not customary for us to repeat a programme in this way; the phenomenal success of six years ago, when the theatre received several minutes of applause over two nights, led us to make an exception,” said the managing director of the Brno Philharmonic Marie Kučerová.

The central point of Schnittke’s cantata is the seventh part, which depicts the death of Faust. The devilish mockery and humiliation were composed by the author as a tango, during which the female singer’s contralto thunders over the orchestra. “Schnittke envisioned Alla Pugachova in this role, while we considered Lucie Bílá or Helena Vondráčková during the first performance in 2008 at the Music Forum Hradec Králové. In the end, we took a very different approach and chose Iva Bittová. She was so perfect that she was presented as Mephistopheles in 2015 in Brno, and even invited by the legendary Russian violinist and conductor Vladimir Spivakov to perform this estrada tango,” said the dramaturg of the Brno Philharmonic Vítězslav Mikeš. Just like six years ago, the subtitles above the stage turn red as the cantata culminates.

In his search for a text for the Faustian theme, Schnittke deliberately avoided Goethe’s romanticised version and chose the so-called folk reading from 1587, the final moral lesson of which begins with the words “Seid nüchtern und wachet”. The whole work is built on the plan of the Baroque passion play and is a prime example of the author’s polystylism. The Faustian theme accompanied Schnittke throughout his life and became his main creative motif. “After all, on the eve of the premiere he received Catholic baptism,” Mikeš added.

In addition to Bittová, the solo parts will be performed by Jan Mikušek, Richard Samek and Jiří Brückler. The enlarged staff of the orchestra with an unusually big pack of drumming and electric instruments will be accompanied by the Czech Philharmonic Choir of Brno. With this, the number of performers on stage will number nearly two hundred; they will completely occupy the entire auditorium and stage during the rehearsals at the venue of the Besední dům. The concert will be conducted by Dennis Russell Davies. “It is a project that is close to my heart and that of the orchestra in a way. It was during the Faust Cantata that we first met, in May 2017, when I came to Brno and rehearsed this work with the Brno Philharmonic, which we performed at the Prague Spring Festival. That figurative spark jumped between us and a few months later I became the Orchestra’s chief conductor, and I am still very happy about that,” Davies said. The concerts will take place on 11 and 12 November 2021, starting at 7 p.m. at the Janáček Theatre.

The first half of the programme offers a musical image of a knightly tournament, which turns into a horror with the arrival of a mysterious stranger. This four-part cantata on the text of a ballad by the German Romantic poet Ludwig Uhland is based on the English tradition of choral singing and sacred music cultivated by German Neo-Romanticism. That is exactly what Elgar’s musical roots are. In this cantata, the orchestra is accompanied by the choir as well.

Before entering the concert, visitors over the age of 12 must prove themselves to be infection-free, in one of the three ways, and they can use the Bohéma centre, located inside the Janáček Theatre building, for testing.