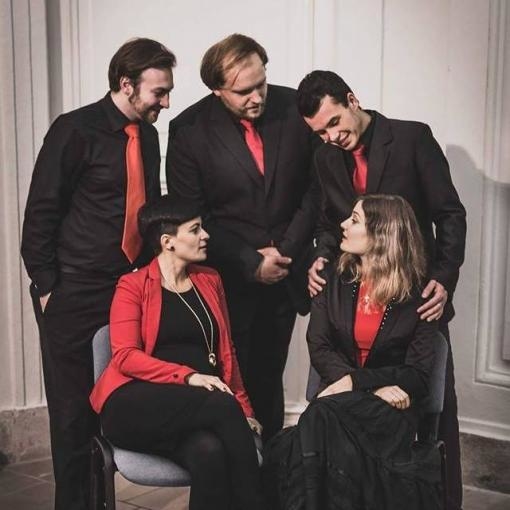 The concert of the Czech Ensemble Baroque's vocal quintet, consisting of spiritual works by authors such as Vodňanský, Schütz, Buxtehude, Capricornus and Monteverdi, was supposed to be part of the 'Bacha na Mozarta!' cycle in the Zlín Region. Due to the current lockdown, it cannot take place with the physical presence of the audience, but thanks to the fact that the quintet meets the condition of singing in a maximum of 5 people in one room, it can take place virtually (meaning online) for all regular and new visitors to the 'Bacha na Mozarta!' cycle. And thanks to that, moreover, not only the audience from the Zlín Region can "participate" in it, so everything bad is perhaps a little good for something. You can watch the concert on YouTube  on Saturday 21 November 2020 from 7:00 p.m. The concert will take place on the originally scheduled date, i.e. 21 November. "We will start the streaming at 7 p.m. on the Czech Ensemble Baroque YouTube channel and we look forward to a virtual meeting with everyone who is missing us. We believe that religious music will be a pleasant encouragement for them. The concert will not disappear from the virtual space after the broadcast, but it will still be available for viewing in the days going forward,” states the artistic director of the quintet Tereza Válková.

The Saturday broadcast will be followed by others. On Sunday 29 November, a large recital named Molieri with Adam Plachetka from the Janáček International Music Festival will be broadcast from Ostrava, followed by a Christmas concert on 17 December from the Besední Dům, and the Czech Ensemble Baroque will continue the streaming next year as well. Keiserrequiem by J.J. Fux, postponed from November, will be heard on 24 January, while in February we will enjoy Dixit Dominus by G.F. Handel, which was originally planned for October. "All the concerts will be available for watching free of charge, without a need for registration or other restrictions, so they are also suitable for those who have not seen us yet and want to listen to us without obligation,"  adds the manager of the cycle Lucie Kořínková with a grin.

Photo from FB of the ensemble