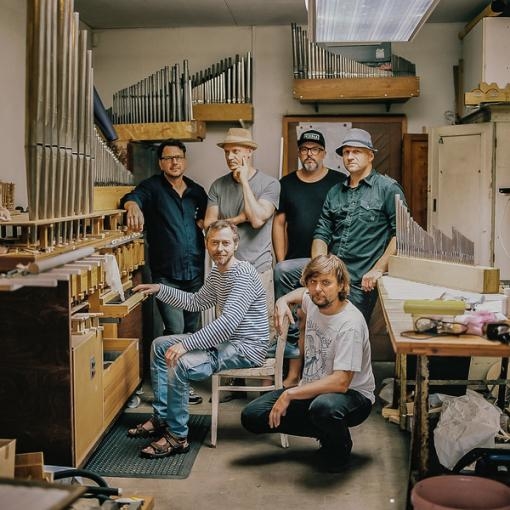 Eight years after the release of their album Šero, which received both the Anděl and Apollo music awards, the Orff Brothers will release their new Song for Stefanie Sauer. You can hear it in concert in Brno, where the band will start their spring tour.

In contrast to their previous production-rich works, the formation has decided to take the opposite direction and present Song for Stefania Sauer in a chamber style, in a simple vocal arrangement accompanied by the young Krnov pianist Matěj Černý. The contemplative piece is captured by the atmosphere of the video clip, a joint work of the band members and tattoo artist and illustrator Nella Vilímková. “When I went home after recording the song, it started to snow really hard for the first time this year. A blizzard. I decided to film the snowflakes on my phone in slow motion. There were young guys cruising by in tuned-up cars, so I left it there. Something was still missing, and I could imagine a simple child's drawing. Although she hadn't done anything like this before, I asked Nella, who tattoos in a similar way. I was pleasantly surprised when she sent me a couple of drawings a few days later and even tried to get them moving. Then my fifteen-year-old son Saša completed it and that was it. Just a DIY,” adds guitarist Lukáš Novotný. The band plans to release another song by the end of the year, this time accompanied by the Krnov jazz guitarist Tibor Žida.

The Orff Brothers, whose name refers to the work of Carl Orff, officially started in 2002. Three years later they released their debut Bingriwingri, and the following Šero (2013) earned them the Anděl award in the Group of the Year category and the Apollo Music Critics Award for Album of the Year. The current line-up consists of guitarist and vocalist Ivan Gajdos, guitarist Lukáš Novotný, trumpeter Libor Martiník, drummer Petr Odstrčil, bassist Břetislav Koláček, and keyboardist and synthesizer player Zdeněk Henych. The concert is planned for 28 April 2022 at 20:00 in the Cabinet of the Muses, or Kabinet Múz. “Kabinet Múz is our traditional and very favourite Brno venue. A cosy and stylish atmosphere, close contact with the audience, and a great location in the city centre. We're looking forward to it,” adds guitarist Lukáš Novotný.