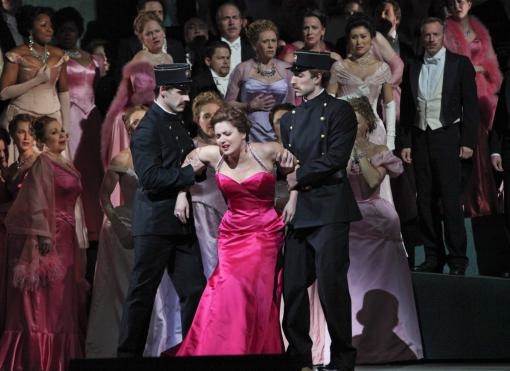 Tomorrow, another season of broadcasts from the Metropolitan Opera begins at the Scala University Cinema. The Metropolitan Opera in New York is launching a programme of live broadcasting into cinemas for the 2019/20 season. Ten productions are directed to Czech cinemas, five of which are new. Opera productions such as Tosca, Turandot or Madama Butterfly will be available for viewing.  New pieces include Porgy and Bess by George Gershwin and Akhnaten by Philip Glass. The broadcast season will begin with Puccini's Turandot featuring soprano Christine Goerke and conducted by  Yannick Nézet-Séguin,  music director of the Met.

Among the novelties on the repertoire there is, for example, a contemporary opera work Akhnaten written by composer Philip Glass. Peter Mattei takes on the title role in Berg's opera Wozzeck. A masterpiece of opera expressionism is a new production of the well-known artist and successful director William Kentridge. The orchestra will be conducted by the aforementioned Yannick Nézet-Séguin.

After nearly three decades, the opera Porgy and Bess by George Gershwin, a work that managed to link American jazz and European opera tradition, returns to the stage of the Metropolitan Opera. Directed by James Robinson, the title roles are played by Eric Owens and Angel Blue under the direction of David Robertson. For the first time in its history,  Met will present Handel's opera Agrippina with Joyce DiDonato in the title role. This satirical work on sex, power and politics has been modernized this time. Wagner's Flying Dutchman with Sir Bryn Terfel in the title role will be the last new production to be watched live.

In addition to the classical work Turandot, Manon, a masterpiece of the French opera written by Jules Massenet, will also be performed. Anna Netrebko will perform in the title role of another Puccini's classic, Tosca. Diana Damrau and Jamie Barton compete with one another in the tragic story of the Scottish queen Maria Stuarda, the second part of Donizetti's Tudor trilogy.