5 May 2022, 2:00
Classical Music Jazz Pop Traditional For kids Other
Author 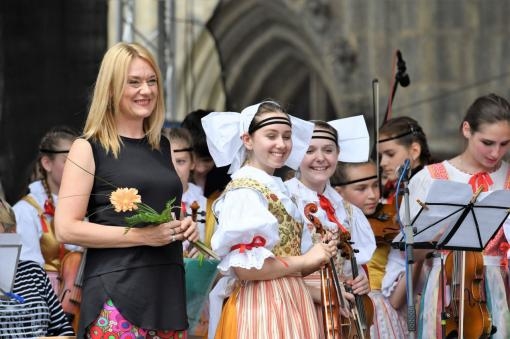 The Czech Radio Endowment Fund and Czech Radio – Radiožurnál, in cooperation with the Endowment Fund of the Brno-born Magdalena Kožená, are launching a non-financial collection named after the favorite Czech musical “Kdyby tisíc klarinetů”, or “If a Thousand Clarinets”. The collection is intended for all child musicians for whom the purchase of a musical instrument is beyond the means of their family budget. The collection works on the principle of connecting donors and volunteers on the platform www.kdybytisicklarinetu.cz.

The patron of the project is Magdalena Kožená, a mezzo-soprano who supports and helps to raise the profile of the unique system of elementary art schools through the numerous activities of her Foundation. “In kindergarten, I admired a teacher who played the piano beautifully for us. We didn't have a piano at home, so I imitated her by tapping on the gas heater grill. My parents were sympathetic to my passion, so they spent the money they had been saving for a car (Trabant) to buy a piano so I could actually play. But not every parent can do such a wonderful thing for their children. This is from where the 'If a Thousand Clarinets' project was born, thanks to which discarded musical instruments get a chance to ring out again and delight a young musician and his surroundings," said Kožená, who is co-sponsoring the collection with Jiří Suchý, the author of the famous film and the original stage play. A number of prominent artists, including Pavel Šporcl, Michal Ambrož, and David Koller, have joined in supporting the project.

It’s a coincidence that two completely identical plans were born at the same moment: The Magdalena Kožená Foundation was launching the project “Second Life for Musical Instruments”, while the Czech Radio Foundation was working on the same initiative entitled “If a Thousand Clarinets”. The organizers naturally decided to join forces in one collection with a greater impact.

"Originally, we had the idea to focus on refugee children from Ukraine so that they wouldn’t feel that they had to abandon the activities they love due to lack of funding. But then we thought it would be fair to help all children from disadvantaged families," said the project’s initiator, Radiožurnál moderator Vladimír Kroc, explaining the genesis of the idea for the Czech Radio collection. He also came up with the idea of the name of the collection, “If a Thousand Clarinets”.

On the website www.kdybytisicklarinetu.cz, teachers at art schools and other schools of all levels, from kindergarten, primary, secondary, and university, can place a request for a needed musical instrument. The application then pairs the demand and supply. "Commissioning directly from schools works to prevent possible abuse and to ensure that children and students who have not yet been able to get into an elementary art school due to high demand, but still have a private teacher, for example, are not forgotten. By the way, even such lessons can also be offered through us as a donation or in the form of volunteer time," adds Gabriela Drastichová, Director of the Czech Radio Foundation.

The project and the “If a thousand clarinets” collection is unlimited in time. It is intended for all children who have discovered a love for music, but for whom the purchase of a musical instrument or paying for lessons with a music teacher is beyond the financial means of their parents. Donors can offer a new or used musical instrument that will get a chance for a second life.