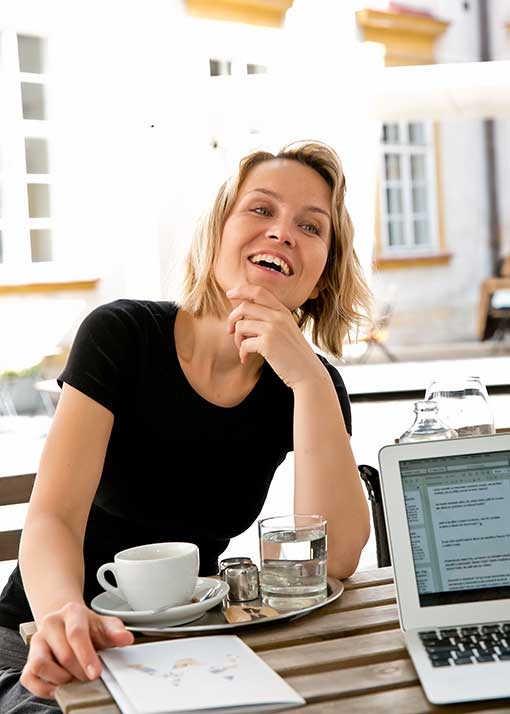 Singer and violinist Jitka Šuranská was born in Kudlovice near Uherské Hradiště. She studied violin at the Brno Conservatory. Šuranská performed for ten years in Stanislav Gabriel's Dulcimer Band, where she developed her enthusiasm for folk music. Later, she began working with Jiří Plocek, who began to direct her from folklore to world music. Together they recorded an album  named Písňobraní [Song Harvest], which was handed the Anděl Music Award in 2005. For several years she was also part of the Bohuslav Martinů Philharmonic Orchestra. Šuranská started to perform as a soloist, cooperating with the Slovak trio Pacora and producer Stano Palúch. In 2013, she released her first solo album, Nězachoď slunko [Don't Go Down, Sun] which was given the Anděl Music Award again. In 2014, her own band began to shape up with mandolin player Martin Krajíček and double bass player Marian Friedl. They performed under the name Jitka Šuranská Trio. In 2016 their debut album Divé husy [Wild Geese] was released.

Jitka Šuranská died after a serious illness at the age of 41.

Below are interview with Jitka Šuranská.

Jitka Šuranská: The Song Must Keep Its Story

We talked with Jitka Šuranská about a new album full of music, where she is the bandleader, but as she points out herself, she is only one of three equal elements. The Jitka Šuranská Trio consists of her, cross-genre mandolinist Martin Krajíček and multi-instrumentalist (educated jazz bassist) Marian Friedl. The three musicians started the debut tour of the first album Divé husy symbolically on 1 October at the Goose Festival in Boskovice, two day later they launched it in the Stará Pekárna Club in Brno. Until mid-October, they will be touring clubs, cinemas and libraries in Náchod, Rožnov pod Radhoštěm, Zlín and České Budějovice. Although the trio mentions folk songs as their inspiration, their author's coat is made of many musical styles, yet it is harmonious and interesting. And Jitka's own musician's path is important and inspirational for the final outcome.  more