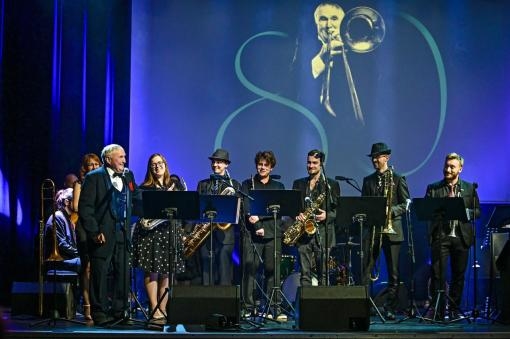 Brno musicians are talented in various genres, and they’re generally long-lived and vital individuals. This was resoundingly clear during the jubilee celebration of Mojmír Bártek, a teacher, composer, arranger, and above all a virtuoso trombone player. The jubilee concert, dubbed Mojda Bártek 80, was prepared by his friends under the direction of B-Side Band trumpeter and bandleader Josef Buchta. Despite the birthday boy’s open and (sometimes emotional) enjoyment of the two and a half hour program, he still remained an active participant of the entire musical production except for brief moments of rest. He performed as the author of many compositions, but above all as a player, trombone in hand and fully committed. more 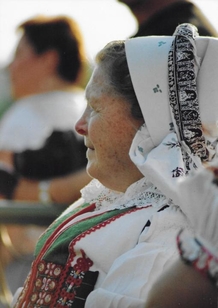 This year's JazzFestBrno: a number of great female singers and musicians

This year's Jazzman, a fanzine of the JazzFest music festival, was full of extensive medallions and articles and also featured a noteworthy commentary by the Czech Radio's dramaturge Petr Vidomus with a somewhat provocative headline: Jazz Doesn't Need to Be a Men's Club. The article contemplates  some  of the gender stereotypes, which the world (and therefore consequently not even the Czech) jazz scene has not yet gotten rid of completely. Great female soloists, mastering instruments previously entirely reserved for men, are growing in numbers. Although gender coding, which Vidomus described in a very precise and ironic way, has not yet been  completely overcome, JazzFest contributed significantly to its gradual elimination this year.  more

As part of this year’s European Tour, Bobby McFerrin visited Brno’s Sono Centre, where he managed to perfectly use the brilliant acoustics and the close contact with the audience. The legend is back. Indeed, he comes back regularly, and not just to Brno.  more

Vilém Spilka: We want to give an alternative to conservative music teaching

Jazz For kids Other
Author

This year’s eighteenth JazzFest Brno will exceptionally not close with a concert, but rather a unique (though not unusual for world festivals) series of musical and dance workshops, centred on children. On Saturday 4 May, in the pleasant environment of Café Práh, near Vaňkovka, the children students will be taken on board by the significant young personalities of the jazz scene: Beata Hlavenková (pianist and composition lecturer), Dano Šoltis (leader of the drum class) and the multi-instrumentalists Jiří Slavík and Marian Friedl (conductors of Wandering on Jazz Paths), who will be accompanied by Kateřina Hanzlíková with the Tancohraní lectures. With the exception of composition, where it is necessary for the participants to be older than twelve, all the other “classes” are open to everyone, including the youngest. We asked the co-author of the idea of the children’s workshop and director of JazzFest Brno, Vilém Spilka, for further information.  more

The Malina Brothers Gave us a Truly Amazing Concert

One of the musical highlights of last week was the concert of the Malina Brothers with two unique guest musicians, Kateřina García and Charlie McCoy in the Sono Centre in Brno. And because the performance was recorded on a professional video for the band’s first live DVD, the evening itself was extraordinary both in its length and quality.  more